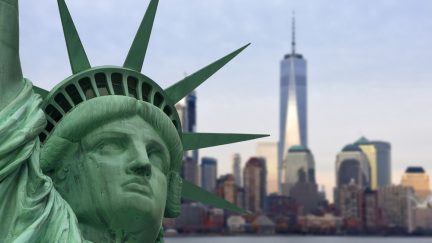 A refugee is defined by the US Department of State as follows,

“A refugee is someone who has fled from his or her home country and cannot return because he or she has a well-founded fear of persecution based on religion, race, nationality, political opinion or membership in a particular social group.”

Concerning refugees and immigration, legal and not-so, why would large segments of our populace passionately throw recently requested enhanced caution to the wind, or reduce it to ineffectiveness?

Here are at least two reasons.

1-To “prove” that they are not bigoted, phobic and prejudiced individuals.

It becomes about them and their “image”, not the immigrant or our country and citizen-security.

2-To realize the financial advantages of the immigrant program.

Might those who march against the “bigoted extremists”, now making laws to keep Americans safe, ever welcome a refugee or immigrant into their personal home? Not likely, but, they will gladly support laws that force them into selected communities across our country.

There are at least 350 federal subcontractors who stand to gain or lose millions in awarded subsidies. And yes, they are funded by you and me, the tax paying citizen. These NGA’s, Non-Government Agencies each have staff and salary needs. They lobby our Congress on a regular basis. Many use the “Christian Gospel” to feed their need for more and more funds with less and less of the contributions making it to the cause. If these government approved organizations were vetted with the scrutiny now applied to Syrian refugees, how many would fail? Such questions may explain some of the hyper-panic we see from the media who are passionately fanning the flames of discontent as we speak.

After 12 months of residency, refugees must apply for permanent resident alien status. Five years beyond this happening, this same refugee may apply for citizenship. Now, these people must decide if they will try to live like “the Joneses” or not. Capitalism or Socialism? Pluralism or monotheistic rule? What will assimilation and democracy mean to and for them by way of compromise?

THE NEEDS ARE GREATER THAN ANY ONE COUNTRY

At present, there are 7 times more refugees (21 million) in this world than the United States has admitted (3 million) from 1975 until present day. Money, and lots of it, drives the refugee train. Politicians need votes for handouts and Big Business America wants cheap labor. Imagine the immigrant-refugee’s shock when they realize that business profiteering, not genuine human kindness, provided their entrance into the USA.

The United States has set annual limits for good reasons.

Here is my immigration story. When I was just a wee lad, it was very common to roam the neighborhoods. My buddies and I would leave our own “crib” to venture into another’s without fear of reprisal or gang attacks. This was your typical blue-collar world of hard working dads and, for the most part, stay at home moms. It didn’t take long to discover the moms who could cook well and those who would invite you to stay over for a meal. Hello Mrs. Jones! My friends and I developed the art of looking pitiful and malnourished. Some of us came from homes that were, let’s say, not as well-supplied with such great cooks and overt friendliness. Some, downright abusive. If we could have, we would have left our own homes and immigrated to the “Joneses” for all the benefits of life, liberty and the pursuit of roast beef. But sorrow upon sorrows, the Jones family already had 4 children and Mr. Jones was maxed out on his annual budget. This made me think. Let’s get the Government to kick in”. If they would take, let’s say, $1,000.00 per month–per child, of other people’s money, this would allow for all of us to leave our less-than lovely homes and head over to live with the Joneses. Upon hearing this, you should have seen the horror on Mrs. Jones’ face. She was thinking of all the meals, fights and sheer exhaustion. And she knew that not all of us boys, so good at pretending, would arrive with good intent. One bad apple puts her own four dearly-loved children at risk. But, you should have seen the glee on Mr. Jones face. He was calculating all the profits! Finally, not living from pay check to pay check. And all we could think about was the life of ease and freedom, along with ham, butter beans, and banana pudding. Then the worst thing imaginable happened, I woke up from this dream that gave me hope. I woke up to a host of realities, most very unpleasant. I would have to eat Chef Boyardee in a can again. Tough news for a spoiled, refugee brat.

When the church is being the church, she is often at odds with the government, the world and its preferences. (see abortion and SSM for starters)

When the church receives funds and preferential treatments from the government, she must adhere to the policies assigned and these are not always good for either. We see just how far the church will compromise herself for money and power. It’s like a dance where one partner knows only the Waltz and the other must dance the Mambo. One has two left feet and the other has two right.

Someday, if there is a healthy separation in church and state affairs, (the religious come to good and end up doing quite well) this could all go away. Until then, we awkwardly dance together at the Immigration-Refugee Ball. Sponsored by, you guessed it, the NGA’s, Congress, Jesus, Buddha, Allah, & Mr. & Mrs. Jones.