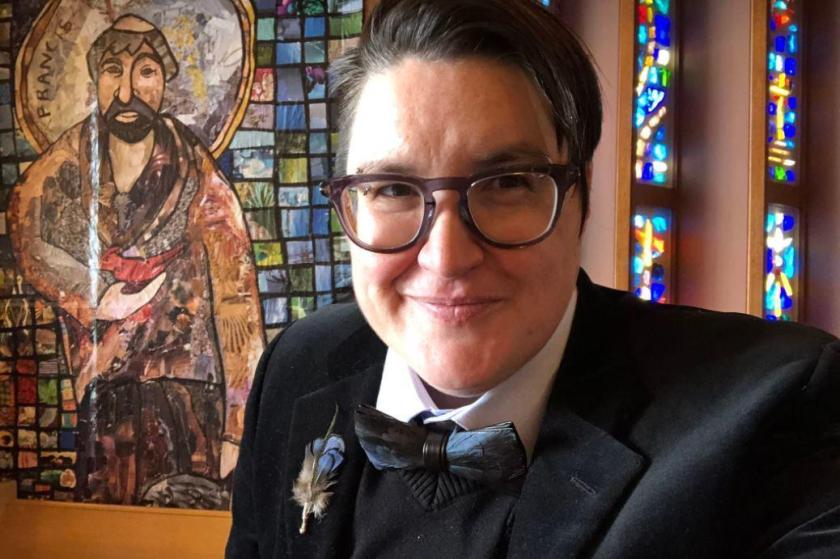 The former Evangelical Lutheran (now neither evangelical nor Lutheran) church body captures yet another award for cultural conformity and thumb-nosing at God.

The former Lutheran Church –namesake of Martin Luther–namesake Protestant Reformation, is now but a withering, sickly, emaciated body on the gurney, defying doctors orders and protocol for wellness.

The evolution from opening their pulpits to women in 1970, to the first openly “gay” leaders, to now, the first “Trans-gender Bishop” is but a demonstration in brief time of how Satan works in not so mysterious ways. This man in the picture (wanting to be called “They”) shows how sickness can be paraded as normalcy by an open defiance and by successfully intimidating weak and spineless leadership within a denomination.

The former Evangelical Lutheran Church died many years ago and yet it naively carries on in the name of nicety and conformity with a world that is the sworn enemy.

“You adulteresses [disloyal sinners—flirting with the world and breaking your vow to God]! Do you not know that being the world’s friend [that is, loving the things of the world] is being God’s enemy? So whoever chooses to be a friend of the world makes himself an enemy of God.” –James 4:4 AB

Boasting 4 million members in 2011, this wayward, formerly Christian body now struggles to find even 1 million members active in a Sunday gathering. Only 1 in 10 of their attendees are under the age of 30 with the average age being 58. The sexual revolution and its many delusions found a nesting place in one church, then one association, then infiltrated an entire denomination–make that many dead and dying denominations.

Also, the Presbyterian USA, Church of Christ, Episcopal, and others who proudly defy God and His word at their peril–at their dispersal–at their non-existence and impossible attempt at being “The Church”.

The Church is a Bride–Not a “They”

The church is comprised of people–all sinful people–who would bring their lives, sins and flaws alike, to a redeemer. We bring these, not for affirmation but Christ-absolution. We bring them for forgiveness, not fondness. We desire right relation with God and redemption of mind, body and spirit, and no law lending permissions to the contrary shall free us from the guilt and shame associated with our sin.

God has defined normalcy. He preaches His sermon “NORMALCY” through nature, science and the history of mankind. Our task is to learn and obey, not to rebel. The bible, God’s Word, is worthy of our trust. It is capable of guidance, especially when we find ourselves at odds with these eternal words. Jesus said, “If you love me, keep my commandments.” –John 14:15

This same JESUS is the ultimate Conversion Therapist–

The Gospel of Grace is the ultimate Conversion Therapy. …“some of you were.”

“Do not be deceived: Neither the sexually immoral nor idolaters nor adulterers nor men who have sex with men nor thieves nor the greedy nor drunkards nor slanderers nor swindlers will inherit the kingdom of God. And that is what some of you were. But you were washed, you were sanctified, you were justified in the name of the Lord Jesus Christ and by the Spirit of our God.” –I Corinthians 6:9-11

Do not be deceived. This man, pretending to be someone other than himself, is no minister for Christianity. In child-like rebellion, he is riddled with distortions born of sins that he chooses to call “gay” and “trans”. His dysfunctions, known by sufferings and rebellious unrepentance (and now heralded through positions of spiritual authority) only cause him further shame as he disgraces the church–the Bride of Christ. It appears that he will no doubt continue his journey of spiritual death as a son of disobedience as long as there are those who through their own lack of spiritual character and integrity lend a pseudo-support–and as long as he interprets the bleating of these lost sheep as meaning anything other than dark emptiness.

Do not be deceived. ALL Sin destroys, disrupts and disfigures. This is why God hates sin. He hates sin in you and me when we choose it over peace and righteousness. The frightful reality is that when we call evil good and good evil, then we are back at Romans Chapter One, deciding if God and His word will be denied, debunked or wisely heeded–If perhaps He will give us over to our sin.

WHAT SHALL I DO WITH THESE WORDS?

“God let them follow their own evil desires. Women no longer wanted to have sex in a natural way, and they did things with each other that were not natural. 27 Men behaved in the same way. They stopped wanting to have sex with women and had strong desires for sex with other men. They did shameful things with each other, and what has happened to them is punishment for their foolish deeds.

28 Since these people refused even to think about God, he let their useless minds rule over them. That’s why they do all sorts of indecent things. 29 They are evil, wicked, and greedy, as well as mean in every possible way. They want what others have, and they murder, argue, cheat, and are hard to get along with. They gossip, 30 say cruel things about others, and hate God. They are proud, conceited, and boastful, always thinking up new ways to do evil.

These people don’t respect their parents. 31 They are stupid, unreliable, and don’t have any love or pity for others. 32 They know God has said that anyone who acts this way deserves to die. But they keep on doing evil things, and they even encourage others to do them.” –Romans 1:26-32

18 “From heaven God shows how angry he is with all the wicked and evil things that sinful people do to crush the truth. 19 They know everything that can be known about God, because God has shown it all to them. 20 God’s eternal power and character cannot be seen. But from the beginning of creation, God has shown what these are like by all he has made. That’s why those people don’t have any excuse. 21 They know about God, but they don’t honor him or even thank him. Their thoughts are useless, and their stupid minds are in the dark. 22 They claim to be wise, but they are fools. 23 They don’t worship the glorious and eternal God. Instead, they worship idols that are made to look like humans who cannot live forever, and like birds, animals, and reptiles.

24 So God let these people go their own way. They did what they wanted to do, and their filthy thoughts made them do shameful things with their bodies. 25 They gave up the truth about God for a lie, and they worshiped God’s creation instead of God, who will be praised forever. Amen.” –Romans 1:18-25

Do not be deceived. We (the church) hope and pray for this man and for all who are deceived with and by him to find redemption and a repentance that proves self deception has given way to agreeing with God rather than a continuance of self-deception and cover-up.

As John the Baptist spoke to the Pharisees, this is a fitting word for Megan, the LGBTQ+ world, the Church and all of us who would trifle with God about our personal sins as though they were not.

8 Produce fruit in keeping with repentance. 9 And do not think you can say to yourselves, ‘We have Abraham as our father.’ I tell you that out of these stones God can raise up children for Abraham. 10 The ax is already at the root of the trees, and every tree that does not produce good fruit will be cut down and thrown into the fire.” –Matthew 3:8-10