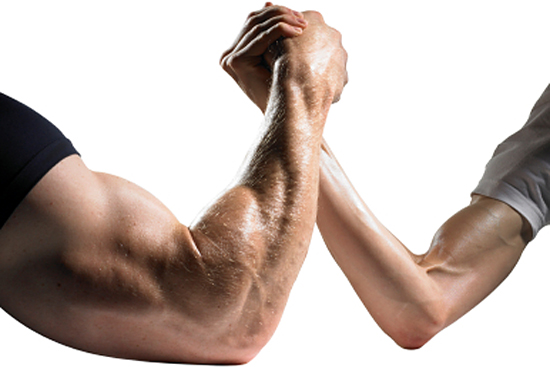 Why is it that men and women are being forced to do battle with each other?

Where did the need for superiority and dominance come from?

OK. Just who is the strongest, a man or a woman?

Keep In mind that God does not compare men and women in demeaning ways, (that’s what we do) but He does contrast them. He certainly makes them complimentary to each the other by assigning tasks and purposes that are unique to their sex.

What we see below is that most of our relationships are mutually engaged rather than exclusively practiced. Here are some foundational presuppositions and you may or may not agree with them.

Man and woman are University. (unity in diversity)

Man and woman can know guilt and shame.

Man and woman can feel aloneness.

Man and woman are both sinful and selfish creatures.

Man and woman need each other innately.

Man and woman (one each) constitute marriage.

SCOTUS got the erroneous idea that the word marriage was up for debate and change of ownership.

So the Lord took some soil and made animals and birds. He brought them to the man to see what names he would give each of them. Then the man named the tame animals and the birds and the wild animals. That’s how they got their names.

None of these was the right kind of partner for the man. 21 So the Lord God made him fall into a deep sleep, and he took out one of the man’s ribs. Then after closing the man’s side, 22 the Lord made a woman out of the rib.

The Lord God brought her to the man, 23 and the man exclaimed, “Here is someone like me!
She is part of my body, my own flesh and bones. She came from me, a man.   So, I will name her Woman!”

24 That’s why a man will leave his own father and mother. He marries a woman, and the two of them become like one person. 25 Although the man and his wife were both naked, they were not ashamed.”

MAN AND WOMAN BOTH SHARE THESE TASKS AND PURPOSES

There are at least 8 areas that can be clearly evaluated and tested for just how strong a man or woman might be.

“How can anyone break into the house of a strong man and steal his things, unless he first ties up the strong man? Then he can take everything.” –Jesus     Mark 3:27

This does not presume a woman is weak. (approach any female and attempt to harm her children) It assumes a strong man in position to care for his own. God does not compare man and woman-he contrasts them.

We find great inconsistency in our humanity. The same man who might wrestle a bear to protect his family might show no spiritual or moral courage when evil enters his home through various forms of media. (TV-Internet) He allows his family to be attacked at will.

What we do see today is an emasculation of would-be strong men, not for benefit, rather an attempt to “prove” that women are “superior”.

“People who don’t take care of their relatives, and especially their own families, have given up their faith. They are worse than someone who doesn’t have faith in the Lord.”  I Timothy 5:8

This verse speaks for itself and the absence of a government role is not accidental.

Men and women need the presence of God for guidance, courage and wisdom.

“Be brave and strong! Don’t be afraid of the nations on the other side of the Jordan. The Lord your God will always be at your side, and he will never abandon you.”

We often abandon Him while denying our own vulnerabilities and weaknesses.

Men and women, to be strong, must welcome the strength of God. This takes less, not more pride in human strength alone.

“Finally, LET (allow-welcome) the mighty strength of the Lord make you strong. Put on the armor that God gives, so you can defend yourself against the devil’s tricks. We are not fighting against humans. We are fighting against forces and authorities and against rulers of darkness and powers in the spiritual world.” Ephesians 6:10-12

“Even if you think you can stand up to temptation, be careful not to fall. You are tempted in the same way that everyone else is tempted. But God can be trusted to not let you be tempted too much, and he will show you how to escape from your temptations.”  I Corinthians 10: 12-13

Men will always be tempted to use love to obtain sex.

Women will always be tempted to use sex to get love.

We must fight against the notion of using each other and teach our children well by example.

Look out for the weak. Some followers, (men and women) are weaker than others. We do not bow to their weakness and make them weaker by being responsible in their stead, but we do nod to them. Lending help in the form of kindness and assistance—the kind that puts them on a path of wellness and independence.

“If our faith is strong, we should be patient with the Lord’s followers who are weak. We should try to please them and not ourselves. We should think of their good and try to help them by doing what pleases them.” Romans 15:1-2

Who is more impatient, men or women? That’s right, we are both equally prone to impatience and trusting ourselves where a dependence on God is necessary.

For example, men must develop and practice a sensitivity towards the dimension of a woman that is weak by nature. Anyone who reads in “inferiority” or abusive dominance within the following verse is simply wrong to do so. There is nothing but honor and mutual respect to be found and directed.

“If you are a husband, you should be thoughtful of your wife. Treat her with honor, because she isn’t as strong as you are, and she shares with you in the gift of life. Then nothing will stand in the way of your prayers.” I Peter 3:7

A Christian man or woman must be immersed in humility, acknowledging their own weakness, insecurities and dependencies.

SUPERIOR VS. INFERIOR AS IT CONCERNS THE SEXES.

The push for Super-Hero’s is for the comics and pretenders.

“Three times I begged the Lord to make this suffering go away. But He replied, ‘my kindness is all you need. My power is strongest when you are weak.’ So if Christ keeps giving me His power, I will gladly brag about how weak I am.”  II Corinthians 12:8-10

Man and woman—will you brag of your weaknesses rather than stick out your chest in pride and self-sufficiency alone?

If not, there is a day of reckoning ahead for you. Humility is the prime attitude and character of the Christ within us.

Will you join the world in competition for dominance and superiority or choose submission?

Will you seek to become healthy and strong by asking for guidance, council and therapy–regardless of you mate deciding to do the same? By the age of 40, everyone can use a good counselor/therapist to talk through the difficulties that life brings. Our glitches in character — Our cracks in our armor show up to reveal our humanity, sinfulness, and selfishness.

THERE IS NO INNOCENT PARTY IN MARITAL FRICTION. If you believe your partner is responsible for 80% of the problems you experience (and you the 20%), then work as if the 80% belongs to you. That is being the stronger of the two!

CHRIST’S EXAMPLE TO EACH OF US

He depended upon and submitted to the Father so that we could learn to do the same. This did not make Jesus inferior. It led to an honorable name. This is what proper submission to authority does for us too.

“Christ was humble. He obeyed God and even died on a cross.
Then God gave Christ the highest place and honored his name
above all others.”  Philippians 2:8-9

The winners are the ones who submit to God as Christ. In doing so, a woman finds great security in being honored by her husband as she prefers him in honor. A man finds his security in submitting to God while loving his wife as Christ loved the Church and gave himself for her.

By the way, it is doubtful that you will ever choose submission to your husband until the following:

1-Your submission to God and willingness to follow His word. (prerequisite)

2-His submission to God and willingness to follow His word. (non-prerequisite)

The losers are the prideful and self-serving who make a competition of the sexes.

Such a man will believe in a degrading dominance and such a woman will practice a self-defeating independence from her husband, if not all men. She believes that all men are this way and indeed, in her world, this may be true.

NOTE: Any and all abuse in the forms of threat and bodily harm must be dealt with immediately. When possible, avoid such harm by separation. If and when abuse happens, turn the offender over to the police immediately.