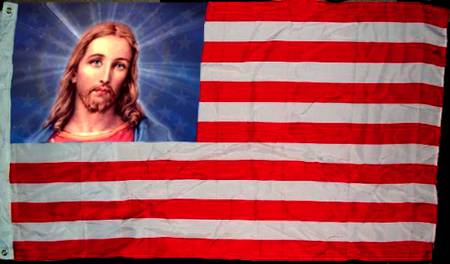 There has been much to do about this nation being “Christian”. Such a thought brings me many questions to ponder. How many Christians must be present in the populace to constitute? Does one or more unbeliever mess the whole thing up?

Is this a majority rule kind of thing? The reality is that this is a nation founded on and for religious freedom, and in the early years perhaps the majority of people were Christian. But the inevitable has happened. Our Constitution has allowed people of all expressions of faith to join the ranks.

Prayer in school used to mean a Christian prayer. Increasingly, it could be a Muslim, Jewish or Hindu prayer. Agnostics and atheists want their freedom of expression and freedom from ours too. If we accept the fact that we have never been a “Christian” nation, we can move forward without fear. Attempting to obligate God to make all the people in this country “Christian” is futile and actually anti-Christian.

Does this mean that we no longer believe and desire with God for all to know Him, the Jesus of love and salvation? Certainly not; quite the opposite. (II Peter 3:9) All people are a part of God’s loving creation, yet not all accept His Christ for the forgiveness of their sins—thus not all are His children. All Christians are called to demonstrate (witness) Christ to their culture and world.

“Some people accepted Him (Jesus) and put their faith in Him, so He gave them the right to be the children of God.”  (John 1:12)

If we Christians do not a Christian nation make, then what is our purpose?

“God Bless America” has to mean more than, “Lord, please make everybody like me so that I won’t feel insecure.” If I really want God to bless America, then I must be ready to love those whom He loves. Last I checked it was “God so loved the people of the world”.

This includes the Muslim, Hindu, Shinto, the atheist, the LGBTG, and help us all, even those back-sliding Baptists! Hard Leftist devotees and Fundamental Right winged rabbrousers will challenge our love factor to the max.

Real Christians are Christ followers, his disciples and witnesses in a place called the world. The USA is a pluralistic nation where people of many faiths co-exist. God is not nearly as threatened by this invasion of world religion as we might be. He is not panicking. He is too busy loving (John 3:16) and we often miss out because we are fussing about trying to protect a title that never existed. Instead of allowing Him to love through us, we often busy ourselves with saving God and country. Instead of being excited at the prospect of personally getting in on the fulfillment of the Great Commission, we carry on as if God needs to chase these unbelievers out of “our” country.

The “people of all nations” are here! (Mark 13:10)Why aren’t we happy? It’s because we have an agenda not belonging to God. Like Peter, James and John, (Matthew 17) who wanted to enshrine the mountain top where God’s presence was seen, we too seek this brand of security in the form of establishing, not the Kingdom of God, but our Christian Empire.

Does the bible inform us on what it means to be Christian in this nation? Yes.

When Jesus birthed His church, and when they were first called Christians at Antioch, it was in the midst of a mission field. They were minorities in a Roman Greek culture that wanted nothing of this new Jesus movement.

Christs’ followers often had to choose faithfulness over persecution.

Nations and cities were pagan, religious and nothing. Judaism was all about laws that had no hope of saving people. The Greeks loved philosophy and the Romans enshrined materialism. Standards of morality were–let’s just say, the worst of America is a Mr. Rogers Neighborhood by comparison.

They certainly did not have prayer in their schools led by devotees and disciples of Jesus Christ. Yet, Christians loved and cared for those in their midst and Christianity flourished. Not because of forced assimilation or hanging placards in the public square of the 10 commandments, rather an open door to all that was to be found in the coffers of grace–ALL FOR FREE–TO ANY AND ALL WHO WOULD OPEN THEIR HEARTS TO CHRIST.

Jesus could have pronounced them all Christian and assured that only Christian people existed. Instead, He gave them a choice. From then until now, people too often want anything but the narrow path Jesus offers and from then until now this has never diminished the invitation he gives to new life.

“Anyone who belongs to Christ is a new person. The past is forgotten and everything is new.” (I Corinthians 5:17)

For the time being, the U.S.A. still has much of the Jewish and Christian bible at the core of its laws and government.

But this does not make the nation Jewish or Christian any more than the Greek influences make us Grecian. The people in her democracy can change her laws as they choose and it is obvious that we as a country are always changing.

What’s the worst that can happen as we do? We may continue to regress towards a way of life similar to those early followers.

They knew the difference between standing up for God and taking up for God. God does not need us to put on the gospel gloves and come out swinging. He is not some impotent, fearful entity who cannot fend for Himself. He has promised that His church will not fail; His church that the gates of hell will not prevail against. “The church” means us! The gates of hell shall not prevail against us!

He means for us to trim our lamps, to stand firm for him, his Word, truth and justice; whether we are a minority or majority.

We have been commanded to love and to tell — then leave the results of our obedience in His powerful hands.

Others are in the business of nation building. We are to be Kingdom builders. His Kingdom. Whatever your denomination of choice, be sure that the Christ flag is flown above and not below the one representing your clan. (first clue that you are Christian)

God continues to place those who love him into politics, law, medicine, and every field of study or trade. This is truly Gods way of blessing America; through the witness and service of his faithful-obedient followers; never majority rule, coercion or flag waving.

Good News– “God Bless America” as a benign postscript to a politicians rhetoric is soon to vanish from our midst.

The confusion over which god and the embarrassment that a god is even mentioned in such an “enlightened, progressive” country will see to this.

When we sing, “God Bless America”, we know that increasingly, there are many gods in this country/world. Even though the song clearly reflects our Judeo-Christian heritage, we as Christians must accept the fact that this song may well be just one more reminder of a distant past. It likely will become yet another offensive text that must be outlawed.

Let us pray continually that the God of our bible will use us as we share his love in Christ with all.