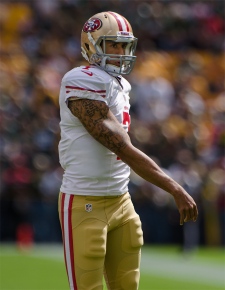 To the large percentage of people who do not watch television for your daily news, you may not have seen Collin Kaepernick (football player in the NFL) seated there between the coolers while everyone (I assume) else was participating in the national anthem by saluting the flag and trying to hit a few of the notes up in that high range.

Why, you ask, would he not stand in respect? He said,

“I am not going to stand up to show pride in a flag for a country that oppresses black people and people of color. To me, this is bigger than football and it would be selfish on my part to look the other way. There are bodies in the street and people getting paid leave and getting away with murder.”

The first thing I want to say is the obvious. Collin, here in the United States of America, has every right to do what he did.  I can name you a few countries where the multi-million dollar ball player might not fare as well as he has here. His worst repercussion so far is that a few of his #7 jerseys have been burned, and numerous insults have been spiraled at the quarterback who has no shortage of patriotic enemies at the moment.

Choosing to refrain from saluting America as a solution to continued racial activity is like going on a protest-fast to correct certain people who continue to allow unsafe practices in food manufacturing that result in sickness and death for untold thousands every year. His protest is just, just at the wrong convention. I suspect that Collin, a bible believing man, will right this blunder soon enough.

His tattooed arms, chest and back (all I know about) tell the story of his faith in God and Jesus. It’s like a Sunday School lesson with ink on skin instead of the old felt boards.

For you equipped me with strength for the battle; you made those who rise against me sink under me.”

And his left arm bares the one most appropriate for him at the moment,

Collin might do well to remember that this God he brands on his body has been rejected so many times, I would not be surprised to hear that Dr. Phil has been called in for an intervention. Jesus was done in by sinful prejudice in the name of freeing us all from slavery to sin, and to this day his name is repeated affectionately and consistently after hammers hit fingers and cars pull out in front of us. Church committees have wolves in sheep’s clothing, and the wheat is still mixed in with the tares. Pulpits prop up too many pretenders and the Pharisees refuse to go away, even today.

For all this, I suppose we all should just stay seated, blame Jesus and quit going to church?

So that’s where all the people went…

Collin’s big chest tattoo sports the words, “AGAINST ALL ODDS”.

A fitting  commentary for his next few days and weeks as he gets this thing under control.

This Jesus Collin speaks of once said,

“You will always have the poor with you. And whenever you want to, you can give to them.” (Mark 14:7)

As a sad commentary to humanity, along with poverty, we will also always have prejudice and hatred among us, because it is in the heart of unregenerate mankind to do and to be so.

BUT— whenever I want to take my hundreds, and whenever Collin wants to take his millions, we can combine this funding with our caring hearts, and do our part to make a difference.

So Collin, let neither one of us try to guilt others into our version of desperate battle cry. Our branded/tattooed Jesus never resorted to such.

Our flag is not flying for anyone to hold it hostage to some political activism, no matter how just the cause. Our National Anthem is to be sung by scallywags, sinners and even the unpatriotic alike, because, at least for the moment, we still are “the land of the brave, and the home of the free.” Men and women have fought and died, still do; and to shun the flag and song of our land is to belittle their service.

Our salute is demanded, not by white or colored humans, but a power of different sorts–that of dignity and innate worth.

All people in this free country abuse such freedom and bring reproach on the rest. It’s a cheap shot to ask the flag and national anthem to do what I am unwilling to do. They didn’t sign up for that job.